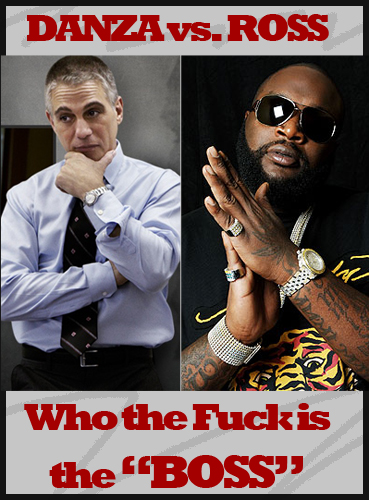 Maybe it’s because I’m an 80’s baby, but I’ve always associated the word “Boss” with Tony Danza.  So recently I had an epiphany when I realized that at some point, Rick Ross totally jacked Tony Danza’s “Boss” title…  What the fuck man!?  You can’t just go and do that shit without a formal BigSteez analysis… So now I’m forced to go and play a game called:

Since this is a “Title Fight” it will be 5 rounds or til there’s a KO.

Round One: WHO ARE THEY: The Basics…

RICK ROSS – Black rap dude with an amazing beard and a butt load of tattoos.  I say that because he has so many tattoos, odds are he has some on his butt cheeks.  But that many is definitely “Bossish” in that he hired a ton of artists to tattoo the said buttocks.

TONY DANZA – A good lookin, good cookin, Italian American actor.  His unorthodox portrayal of a funny, sensitive, domestic male probably made him the 1990s largest target for girls to throw their vaginas at.  A very “Boss Like” quality indeed…  http://en.wikipedia.org/wiki/Who’s_the_Boss%3F

ROUND ONE GOES TO DANZA: Danza’s Pussy magnet > a huge beard & tats.

END_OF_DOCUMENT_TOKEN_TO_BE_REPLACED

So logging into Youtube to get a tutorial to fix something on my car, I figured I’d get distracted for about 4 hours.     This little gem appeared on my homepage and I can’t help but be insanely impressed by this dude.  Check out his other vids he’s legit.

Posted by Mazz on May 25, 2013 in Entertainment, Mazz, Music, Random Cool Shit, Videos

Recently I started a play through of all 1500 songs on my MP3 player in order to revisit some old favs and delete some shit I didn’t even know was on it.  One of many artists that stood out in its personal timelessness is J Dilla.  As an ex hip hop fan and having worked in the Mix Tape/DJ retail business for two years, I’ve heard about everything there was to listen to.  I currently have very little hip hop left in my MP3 player due to its lack of actual instruments and redundant themes.  The Big Ls, Tupacs, and Biggies left a void in the genre that can never and will never be filled in my opinion.

Dilla however stands out as a musical super talent even with my own super critical view of hip hop.  Sadly he died prematurely but his body of work is amazing nonetheless.  Even though he’s gone, I smile and turn up the volume whenever he randomly pops on my playlist.  That’s about the best legacy anyone could ask for.

Posted by Mazz on May 14, 2013 in Entertainment, Mazz, Music, Random Cool Shit

Tags: hip hop, J Dilla, nothing like this, RIP, video

With Boston Pride reaching an all-time high, I’ll take this opportunity to introduce you to Slaine. Some of you may know him simply as “the fat dude” from Gone Baby Gone and The Town. However, Slaine has broke into the scene years before his acting debut. Born George Carroll, he can be found collaborating on Special Teamz and La Coka Nostra compilations and mixtapes. Slaine’s solo effort, The Boston Project dropped on April 15th the day following the Boston Marathon Bombings.

Easily my most listened to song of 2012, had to give Volumes some props.  They were my go to snowboard (and gym) soundtrack this season which saw some pretty spectacular powder days so I’ve definitely bonded with their last album VIA.

Caught them at 2011 and 2012 NE Metalfests, these guys show up live too and the ones I met are super cool guys.  If you’re already a fan go buy some merch and support these dudes.

Nice concept. Horrible execution. +1 for sentiment. -1 for completely ignoring Little Mac. -1 for placing emphasis on tank tops. A nice simple hoodie would have sufficed. I don’t think the 8-bit gamers fit into the tank top wearing demographic. If anything, save that for T & C Surf Design retros. 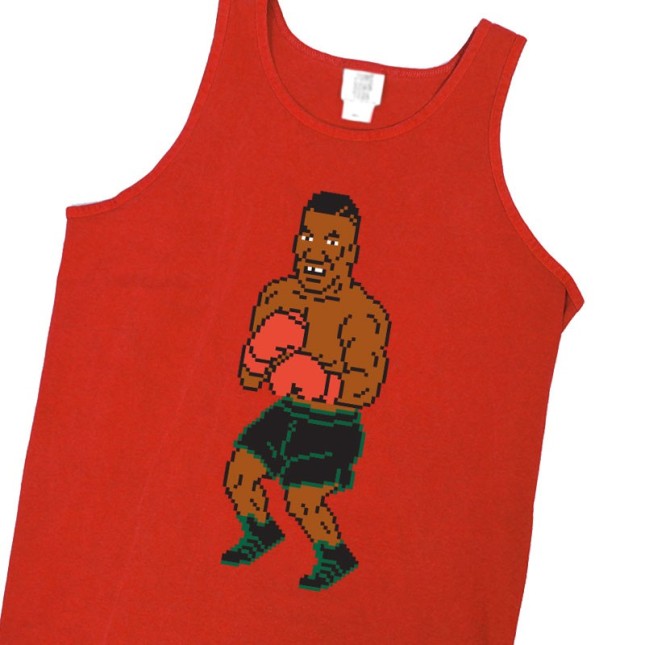 END_OF_DOCUMENT_TOKEN_TO_BE_REPLACED

Spike Lee really opened up a can of worms with all of his Django hating. He couldn’t just let Tarantino have his moment to shine. He had to go and make a big fuss. I find it funny how the equally controversial director behind the racially charged “Do The Right Thing,” “Jungle Fever” and “Miracle at St. Anna” has his jimmies rustled over the portrayal of an ethnic group in film. He needs to take a look in the mirror before he starts throwing stones.