Dana White goes off on EliteXC…

And rightfully so. I share the same sentiments if it’s true that Shaw and Elite may have tampered with the fight. I love White for not holding back. RIP EliteXC.

Kimbo Slice Knocked Out in 1st Round…

Mad props to Dave in Manchester NH for throwing his cash on Pertuzelli on my advice.  I don’t know what’s worse, this fight or the horrible announcers.  I’m pretty happy Kimbo got dropped cuz he acts way to hard for someone thats totally unproven in MMA.  His entourage is silly, his past fights are pathetic and I’m totally sick of him.  He didn’t even tap gloves with Petruzelli at the beginning.  It must really suck being the King at barekuckle backyard fights and getting to the big leagues and looking like a loser.

Kimbo got owned by a sissy punch too…

Okay I hate to overdo the whole Kimbo Slice thing but I thought this would be postworthy. Over the past week, rumors have been flying around regarding a possible matchup between him and who else but Mike Tyson. EliteXC sources have been quoted as saying they would definately be open to talks with Mike Tyson’s representatives. I don’t know how much merit these rumors hold, but I wouldn’t put it past Mike Tyson to cash in on the fight, especially after the E:60 segment describing his economic troubles. I think I’d want to see this to be a boxing match however, because it would be another Ray Mercer with MMA rules. Click the pic for one of the initial reports. 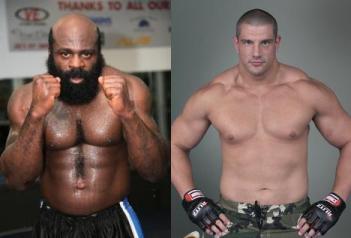 Kimbo, now at 3-0, is set to bang with the 6’5″ 265 pounder James Thompson as the main event for the premiere of EliteXC on CBS taking place on May 31st. The card also features some of the EliteXC’s most popular stars including Gina Carano, Robbie Lawler, Scott Smith & Phil Baroni. Bout time an organization reached a deal so MMA fans could tune in for free on the weekend. Nice job EliteXC.

…and is new EliteXC/Strikeforce middleweight champion. Le put on a crazy display of all types of kicks from his arsenal, keeping Shamrock at bay with front kicks pretty much the whole fight. Shamrock caught him once with a huge overhand right and staggered Le in 3rd round. I actually thought that was the beginning of the end for Cung Le. But less than a minute after getting his legs buckled, Le caught him with a huge kick that snapped Frank’s wrist and put an end to the former champ’s reign at the top of the middleweight division, as he couldn’t answer the bell for the 4th round. Big mistake for Shamrock to try and not get it to the ground. For some reason, he wanted to show the fans he could stand with Cung Le. Bad idea. Now at 35, his arm is going to require surgery before he gets back in the cage. Hope he returns soon because he’s one of the most exciting fighters in MMA. Congratulations to Cung Le. I linked the video to the pic above so check it out before it’s removed.

Watch closely at the saxophonist approximately :22 into the video above. Looks like Kimbo took a swing at the music biz before he got into brawling in the streets of Miami. Haha!

Interesting article from Yahoo! Sports. Seems like this could be the first legit threat to the UFC on Spike TV. Also, Mark Cuban and Oscar De La Hoya have become involved with starting organizations and possibly signing fighters; Bud Light has signed a 3-year deal with the UFC. MMA is quickly becoming more widely accepted. And now with the good possibility of EliteXC on CBS Saturday primetime, the sport could draw huge ratings. There’s also word that Kimbo Slice may headline the first card! Click the banner to check out the story.

I was watching the Shamrock-Baroni EliteXC event from last June when I saw this dude on the undercard fighting vet Tony Fryklund. I can’t recall seeing a more technical kickboxer with a frightening work rate than Cung Le. He has a huge arsenal of kicks, punches, spinning backfists, sweeps and shit I’ve never seen. He’s great for MMA. There aren’t too many dudes in the sport as talented as this guy when it comes to kickboxing. I’m excited for his matchup with Frank Shamrock on March 29th. Easily Le’s toughest competition to date.

Kimbo Knocks Out Tank in 43 seconds…

What did you expect? Tank got his ass handed to him. Kimbo put him face down in 43 seconds. Funny how much hype can go into a fight that only lasts 43 seconds but blame Tank for being a washed up retard. I know he helped create UFC blah blah blah but I never thought Tank was any good anyways compared to the people with technique like Oleg Taktarov, Severn, and Don Frye. People that actually won.

At least maybe now we can lay the Kimbo vs. Tank hype to rest and see him fight someone that actually has a chance of winning. Maybe a Sean Gannon rematch??? Kimbo isn’t a young dude so he needs to make a solid push against some tough heavyweights if he wants to impress people cuz beating up bitches isn’t gonna cut it anymore…

The 42 year old brawler appeared on the late night show with Jimmy Kimmel to speak on how he got his nickname, his history as a mixed martial artist, his partying lifestyle and the upcoming bout with Kimbo on February 16th. This dude seems like he doesn’t give a f*ck about anything.

Looks like the first father & son duo to ever be in the same MMA event will be Ken Shamrock and his son Ryan on the March 8th Cage Rage card. I think there should be some type of clause on fighters’ contracts so when they reach a certain age and decide to retire, they’re not allowed to return to the ring. I’m a long time fan of Shamrock, but seriously what does this dude have left in the tank? Why not just be his son’s full-time trainer? At least he’s signed to EliteXC and we don’t have to worry about Shamrock vs. Ortiz IV.

Looks like this fight is going to happen after all! EliteXC has announced that Kimbo and Tank will headline their February 16th card in Kimbo’s backyard of Miami, FL. Click the pic for the story. After this, time for Kimbo to step it up and throw down with someone who is under 40. Props to Elite for gettin this made though. I know there would be a lot of pissed off fans if these two never stepped in the cage together. Too bad a lot of the hype has died down since the announcement for the original date.

Kimbo is going to be featured this week on the new ESPN show E:60. I saw an ad yesterday. Looks like it is going to be a segment concerning his rise from street brawler to MMA star. It airs tomorrow December 11th at 7:00 PM ET on one of the major ESPN networks. Tune in…

Keeping up with KimboWatch 2007, he promply annihilated his first MMA opponent in less than 20 seconds.  I don’t know anything about his opponent Bo Cantrell and watching the footage I don’t think I want to; he flopped and covered up faster than any of Kimbo’s chubby bareknuckled opponents from his street fighting videos.  As much as those backyard opponents looked like chumps, Bo Cantrell actually validated some of them that lasted longer than he did without gloves.  Anyways I thought Kimbo looked sharp and I think UFC should buy out his contract and throw him some bigger name fights.  General opinion says that Kimbo is an MMA joke but with his strength, speed, and skill I predict he will do well in MMA if he can upgrade from EliteXC which is pretty much a sham.  Headlining that card was Nick Diaz who lost to K.J. Noons.

Unfortunately, it looks as though we’re going to have to wait for the long anticipated Kimbo Slice vs. Tank Abbott brawl. Now that Kimbo has signed, EliteXC apparently has different plans for the notorious underground fighter as they’ve scheduled his debut to take place November 10th against Mike Bourke at EliteXC: Renegade on Showtime. This could be better for Kimbo though, since it puts him in a position to train hard and take the game seriously as he’s not going to be fighting washed up sluggers anymore.  Edit: He is still fighting washed up sluggers…