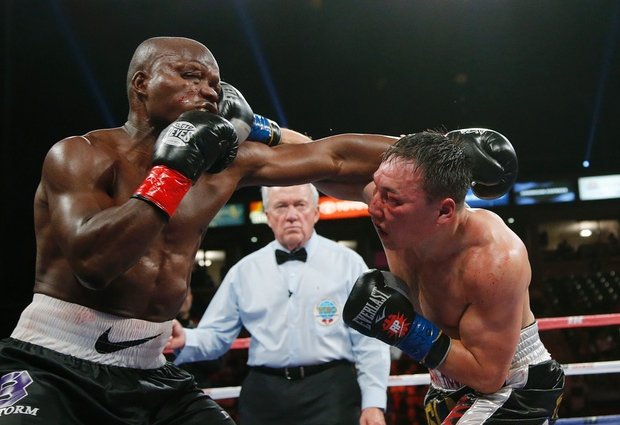 Kimbo Slice is a bona fide hustler. Started out as a high school and college linebacker, but was denied by the Miami Dolphins in his only tryout with the team. Discovered that football wasn’t his calling, so he took to the street earning e-props as one of the best alleyway brawlers. Meanwhile, he was up to his elbows in ass as a bodyguard for the Reality Kings porno dudes. MMA promoters finally discovered him and paid Kimbo to put his street skills to the ultimate test (something the entire MMA world was calling for). He squeezed as much out of mixed martial arts as he possibly could and now he’ll probably live out the remainder of his athletic career beating up tomato cans while the world enjoys the show. That’s what I call the American Dream.

I’m not gonna lie. When I saw Paul Williams hit the deck after Martinez caught him with that monster overhand left, I wasn’t sure he’d ever be the same. It brought me back to when Antonio Tarver basically ended Roy Jones’ career back in 2004. It’s not easy for a boxer to recover from such a devastating knockout. Especially someone like Williams. He makes his living off of fearlessly pressuring his opponents. Now he knows he’s vulnerable to the big shot. Makes me wonder if he finally took the time in camp to work on using his height and reach to his advantage defensively speaking. I hope so. It pains me to think that a fighter with all the physical assets in the world would want to continue slugging it out with fighters when he has the tools to meticulously pick them apart. Tomorrow night boxing fans will learn a lot about what the future holds for Paul Williams when he takes on the undefeated Erislandy Lara on HBO.

This is one of the more notable heavyweight clashes of recent years in a sport once dominated by the big guys. I just checked out the weigh in. Both fighters are shredded. Something your rarely find today. From what I’ve seen as of late, the majority of modern day heavies are cut older and flabbier than everyone below them in weight class. I am actually excited to tune into this one however. Haye has the more aggressive style and is someone that can actually give Klitschko some trouble for once. On the other side, Klitschko is content on throwing a lot of stiff jabs waiting for the perfect time to unleash the biggest right hand in the game. A lot of former pros have Haye getting to Klitschko and winning it either on points or via early KO. I couldn’t disagree more. Klitschko is too big and strong, close enough to his prime, and way too motivated to shut Haye’s mouth. Probably his hardest fight in 5+ years but I fully expect him to emerge as the victor.

Actually I made that nickname up. He’s really internationally knows as “Canelo.” But last time I checked cinnamon was brown. But he’s a redheaded Mexican. So his alias from this point on is La Flama Roja. You heard it here first. In all seriousness, Alvarez is a tough bastard. He fights like a bully and takes punishment as well as he gives it. Based on his looks and his fighting style, I’m pretty sure Micky Ward knocked up some Mexican puta and out popped this dude. He looks to improve his flawless 36-0 record tomorrow night on HBO. Tune in. He’s one of the most entertaining middleweights in boxing.

According to ESPN, this is nearly a done deal and will be fought under boxing rules. Finally a boxer versus a mixed martial artist, both still relatively close to the prime of their careers. Diaz more so than Lacy. Nick Diaz is easily one of the most talented boxers in MMA. I read recently that he has fought professionally in the past and is now training with the likes of Andre Ward. I’m thinking Diaz watched old footage of Joe Calzaghe dismantling Lacy in the UK and saw some similarities between his and Calzaghe’s styles. Lacy has been less fortunate as of late, coming off stretch of lackluster performances, including a TKO loss to Roy Jones. He is however perfectly capable of catching the inexperienced Diaz and putting him to sleep in a flash. Stay tuned for details.

These two know how to sell a fight. Or maybe it’s legit hatred for one another. Can’t say I blame Hop. That French-Canadian accent coming from a dude named Jean would trigger me too. Glad i don’t have to shell out $54.99 for the fight, because I probably would have. This baby will be an HBO freebee.